In South Korea, a new high-tech start-up is only hiring people over 55 and proving a point

In the office of one of Seoul’s young tech companies, workers click away at a frantic pace, eyes glued to the screen, with gamer-like concentration on the complex software on their screens.

Without looking at their faces, you’d never guess that everyone who works at this tech company is over the age of 55 – a strict condition that the company imposes when hiring staff.

In 2013, Mr Chung Eunsung founded EverYoung, a content monitoring company that hires only the over 55’s, because he wanted to do something “practical and concrete” about age discrimination, an issue he sees as a “very pressing” one.

South Korea’s corporate environment is notorious for forcing workers into retirement before the official age of 60. In a recent survey among people aged 20 to 50, 82 per cent of respondents felt at risk of being forced into early retirement.

Mr Kim Seong-Kyu, a manager at EverYoung, said: “They are full of passion. The time that they have, and their interest in this work, are primarily why they come to work.” Staff display a high level of attention to detail, he said, which is a trait that is not so common in younger employees these days. Phones are kept away in lockers, and seniors don’t get distracted as easily.

The company rosters their workers on four-hour shifts, and makes it compulsory to have a 10-minute break every 50 minutes.

The office is equipped with a chic pantry, a breakout area with couches and books, and even a blood pressure machine that staff can use during their break time.

While people usually assume that older workers are slow or at a loss when it comes to technology, those who work here prove that the skills gap in South Korea’s highly tech-focused economy is not deterring them from being part of it.

Said an 83-year-old employee: “I try to keep up with the times and I’m eager to learn new skills again. I have picked up so many new IT skills here and enjoy coming to work every morning because of that.” 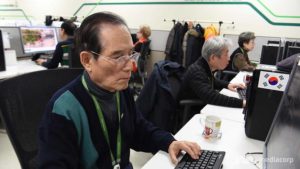