Contemporary new-build can be fine, even in a Conservation Area.

Contemporary new-build in a Conservation Area

Many homeowners worry that their design ambition in a Conservation Area will be severely limited and that they will be forced to produce something in line with the design traditions of their surroundings. The truth is a contemporary new-build can be beautiful, even in a conservation area.

One problem is that the process in itself is not entirely reliant on the conservation officer who, in most instances, should be able to see the design quality of your contemporary scheme. The final call on planning applications in Conservation Areas is made by the planning committee and, as such, it is they and the Parish Council who act as particularly important consultees, who have the decision in their hands.

In theory, a conservation officer could love your beautifully crafted scheme, which is a masterpiece of contemporary critical regionalism using locally sourced materials and undoubtedly enhancing the Conservation Area, but if the planning committee, and Parish Council, dislike contemporary new-builds, then chances of approval are limited. 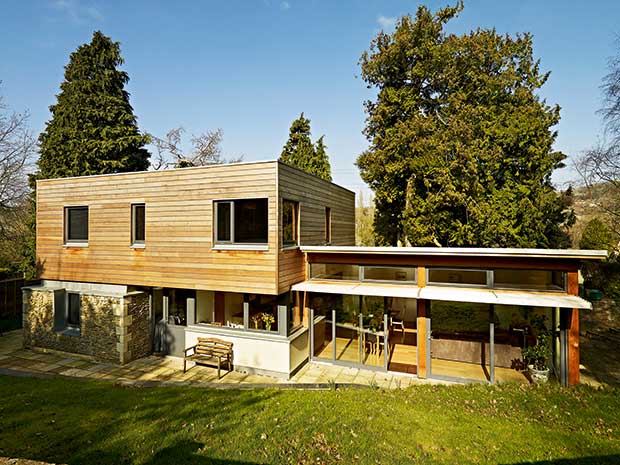 This contemporary new-build cedar-clad design won approval after previous schemes had failed on a wooded site in Somerset. The scheme by CaSA Architects involved clever positioning and a softening of the contemporary form with natural materials. https://www.homebuilding.co.uk/a-conservation-area-home/

Early engagement is critical, both with the conservation officer, the parish council and the neighbours. Applications in Conservation Areas are very much a question of ‘planning ramped up’ and those consultees who, by their nature, will have a much more significant interest in your scheme than would otherwise be the case, need to be part of the process.

Darren suggests a programme of informal engagement with neighbours and attending relevant parish council meetings — he makes a point of visiting them and addressing the council’s concerns in an open manner. It’s much better to take this approach than shutting up shop and trying to take them on.

Here are some things to consider when building a contemporary new-build in a conversation area. Permitted Development (PD) rights still exist in Conservation Areas but are curtailed in some instances (but probably not by as much as you might think).

Here is a summary of the fundamental rules:

If you live in a Conservation Area you will need to apply for planning permission before cladding the outside of your house with stone, artificial stone, pebble dash, render, timber, plastic or tiles.

This is a bit of a grey area, but unless your Conservation Area home is subject to an Article 4 Direction removing Permitted Development rights then you can, in theory, replace your existing windows. Only with the insertion of new windows and doors that are of a similar appearance to those used in the construction of the house. Simply put, the rules in a Conservation Area are the same as those in a regular non-designated area, so you will still need permission for a radically different window scheme (including new openings).

Conservation Area homeowners have the same PD rights as those of regular homeowners except the ability to erect an outbuilding to the side of the house. Other regular PD rights prohibit outbuildings to the front of the property, height restrictions particularly near boundaries, and that they shouldn’t cover more than half of the area of land around the house.

A highly controversial area of late, but the latest is that if you’re in a Conservation Area, you won’t need planning approval for a solar panel unless the solar panel is wall-mounted (i.e. not on your roof) on a wall facing the highway. So, if you’ve got a south-facing house in a Conservation Area, you can pop panels on your roof providing certain limitations are met.